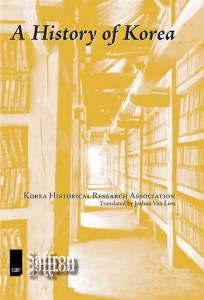 A History of Korea (ISBN 9781872843865, hardcover) is a product of a particular moment in South Korean social and political history, authored collectively by the Korean Historical Research Association and published in the aftermath of the popular resistance movements of the late 1980s that brought an end to military dictatorship and ushered in direct elections for the presidency of South Korea. Buy this book

The historians of the Korean Historical Research Association, who compiled the volume, were not dispassionate recorders of those events but rather active participants in the democracy movements of the time, who understood their scholarship as a contribution to popular resistance against military rule and as a tool for the democratisation and unification of Korea. Buy this book | Table of Contents

These historians were writing against previous understandings of Korean history that they perceived as legitimising political and economic oppression from both Korean elites and foreign powers.

As they stood in opposition to previous histories and their political underpinnings, they proposed their own visions of past, present, and future Korean societies. In so doing, they helped move the popular struggle for the democratisation of South Korea towards the centre of the national narrative.

A History of Korea is a manifesto, a conscious call for a particular interpretation of Korean history for deployment in the democratisation, unification, and class liberation movements of the period.

The Association began as a mass organisation of Korea historians that, according to its founding mission statement, sought to “actively participate in the creation of a truly democratic and independent Korean society by joining together with a new determination to establish and continuously implement a scientific historiography based upon the correct worldview.”

The Korean Historical Research Association thus took up the goal of “contributing to the independence and democratisation of Korean society through the establishment of a scientific and practical historiography.” The Association engages in joint research projects, spreading the results of historical research to the masses, and publishing and distributing academic journals and popular history texts.

At the time of publication in 2005, the Korean Historical Research Association was said to have more than 700 members and has created an efficient organisation that publishes and disseminates papers, books, and bulletins. Buy this book

About the Translator
Joshua Van Lieu, the translator of this volume, at the time of publication, was a doctoral candidate in history at the University of Washington, conducting dissertation research in nineteenth century Sino-Korean relations and Korean political history.