Philosophy of the Nest, by Park Ynhui 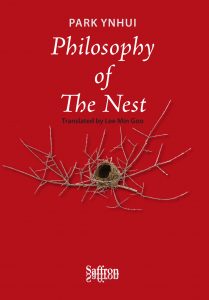 In Philosophy of the Nest, eminent Korean philosopher and poet Park Ynhui encapsulates decades of scholarship as he traces the world history of philosophy from his original perspective. Buy this book.

The author, previously published in the West as Park Yee-mun, a nom de plume, follows an overarching vein in the history of philosophy and introduces readers to the meanings behind many ideas, especially the concept of the ‘onto-semantical matrix.’ Through his engaging, ground-breaking narrative Park offers us a fresh look at the history of philosophy as the world has read so far. Here the onto-semantical matrix serves as a universal measure by which that new perspective is presented to help the readerunderstand and assess all worldviews, the traditional core assertions and discourses of religion, philosophy and science.

At another level, Park’s work in Philosophy of the Nest also represents intellect and thought in Korea through the years and in our time.

Park Ynhui was born in 1930 in Asan, South Korea’s Chungcheongnamdo province.He graduated from the Department of French Literature at Seoul National University, subsequently earning a doctorate in French literature at the Sorbonne, France, and a doctorate in philosophy at the University of Southern California, USA.