The Secret Spirit of Korean Architecture, by Kim Bongryol 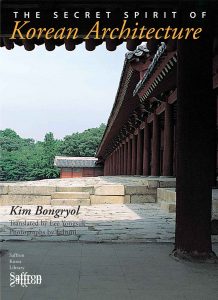 The Secret Spirit of Korean Architecture, by Kim Bongryol, is the first English-language distillation of Kim Bongryol’s ideas on Korean architecture, as a whole and in its various manifestations, and architecture’s role in the history of Korea.

From the time of its original Korean publication the book has been widely seen as a response to the growing international interest in Korean architecture, its tangible historical and contemporary forms, and a multidisciplinary contribution to the discourse that has resulted in new writing and audiovisual output exploring principal features and themes, materials, techniques and methodologies particular to the genre. This revised and updated English version of Kim Bongryol’s original three-volume book was published in two editions, hard cover [9781872843827] and soft cover [9781872843834], as part of Saffron Korea Library Series [ISSN 1748-0477].

The Secret Spirit of Korean Architecture is a response to the growing international interest in Korean architecture, its tangible historical and contemporary forms, and a multidisciplinary contribution to the discourse that has resulted in new writing and audiovisual materials exploring principal features and themes, materials, techniques and methodologies particular to the genre. Korean architecture can rightly be seen as one of the best kept secrets of East Asian cultures and civilisations. While aspects of Korean art have become increasingly popular worldwide, Korean architecture remains unknown outside the circle of specialists and visitors to the country.

As in his acclaimed writings published in Korean, this edited compilation, translated by Kim Yongsuk and edited by Sajid Rizvi, Kim Bongryol holds forth on a range of subjects that are beyond the scope of architecture but may be familiar to students of East Asian art and material cultures, art history and history in general. At the same time he invites the reader to contemplate ideas that are particular to Korea and Korean architecture. While dealing with histories of the architectural landmarks chosen for discussion, the author surprises the reader with some of the most intimate minutiae of information about people and communities involved in the planning and development of these buildings. He is not content with extolling the attributes of architectural treasures under his scrutiny and proceeds further to examine and bring into a sharper relief the human dimension behind the existence of these treasures, engaging the reader with eloquent yet piquant passages on that essential aspect of the processes at work in world architecture.

Kim Bongryol does not wish his audience to remain in thrall of the remarkable achievements in Korean architecture; instead he wants the reader to appreciate Korean architecture in the dual contexts of Korean history and contemporary society. Kim Bongryol is no stranger to the international community of architects and to the world of art and design at large. He has featured in major art and architecture events in the West and has been a pre-eminent participant in biennials such as the Venice Biennale.