Art and Artists in Dubai: A Special Presentation in Eastern Art Report 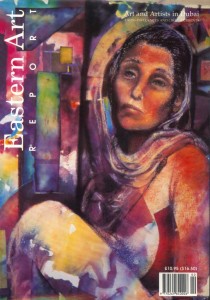 Written and published more than a decade before the current splurge of art in the Gulf, this special issue of Eastern Art Report, focused on the emerging art scene in Dubai in the mid-1990s, is remarkable for its prescience. In various articles, Editor Sajid Rizvi looks at local and expatriate artists and the role of ruling family women in the promotion of the arts.

In this special focus issue, Eastern Art Report (Issue 45) examines the impact on contemporary ‘Islamic art’ of the phenomenal economic growth of Dubai, the cosmopolitan city emirate of the United Arab Emirates in the oil-rich Gulf emirate. Many of the paradigms in the Dubai art scene apply elsewhere in the Middle East.

The rise of Dubai as a regional economic center with ambitious to rival Singapore and Hong Kong has turned the old pearling centre in the Gulf into a magnet for artists. State and corporate sponsorship of the arts and architecture is only just beginning to take shape, and much of art practice in the city state still is governed by an unwritten code and myriad sets of do’s and dont’s, but its ramifications for the evolution and development of the region’s art and culture are obvious. Will it be a purely Arab art scene, or will it reflect the cosmopolitan texture of the city’s populace, which features Asians, Africans, Britons, Iranians and Arabs of different nationalities? East Asian artists—Chinese, Korean and Filipino—have also wielded the brush in the city, new galleries have cropped up, and collectors range from bored rich wives to corporate patriachs.

Art and Artists in Dubai offers the first authoritative survey authored by EAR editors (except where indicated otherwise) of an extraordinary transformation of a commercial hotspot into a port of call for artists and connoisseurs.

A Bridge of Creativity? A historical introduction to the rise of Dubai Dubai Architecture and the Dynamics of Conservation and Urban Renewal
Dubai Museum after Refurbishment
Orientalist Paintings and Maps in the Context of the Gulf Evolution and Development of Contemporary Art in Dubai and neighboring emirates, two articles by Tina Ahmed and Frieda Howling
The Galleries and the Souqs
Sheikha Hessah al Maktoum, the eldest daughter of the Dubai Ruler, in an interview with Sajid Rizvi spells out her vision for artistic development in Dubai Explorer and
Wilfred Thesiger, the late explorer and photographer, in an interview with Sajid Rizvi, talks about old Dubai and the Gulf—an era long gone with the first gush of oil but still retained in his memory as an important part of human experience
Other features in the monograph include:
Europe in India—Paintings, Drawings and Ivories from the British Museum, by Sheila R Canby
Qurans and Islamic Calligraphies in the Khalili Collection of Ottoman Art, by Sajid Rizvi
East in West—Ideas, Issues & Imagery in Works of Chinese Artists in Europe, by Sajid Rizvi
Contemporary Chinese Art and the London Gallery Scene
Book reviews and an index to other back issues of Eastern Art Report