Sir Aurel Stein in The Times 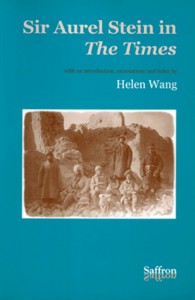 Sir Aurel Stein in The Times, compiled as this book by Helen Wang, is an extraordinary and deeply absorbing compilation of clippings from the Times of London related to explorer Sir Aurel Stein (1862-1943).

Stein, renowned for his archaeological exploration in Chinese Central Asia, India, Iran, Iraq and Jordan, and for his pioneering work on the early civilizations on the Silk Road, is the subject of this compilation of more than 100 articles and news items relating to Stein and his expeditions, as printed in The Times newspaper between 1901-1943. He is also mired in controversy following numerous commentaries in China about his work in the area.

Sir Aurel Stein (1862-1943) is noted both for his explorations and the manner in which they were first announced in the most important broadsheet of the British empire.

Presented in chronological order, they provide a unique narrative of Stein’s career as perceived and understood by his contemporaries. Stein had friends all over the world and useful contacts at The Times. But is there a story behind the publicity? Was Stein media hungry or publicity shy? This hidden context is explored in Helen Wang’s Introduction.

The book is now part of Saffron Studies in Central and Inner Asia and the Caucasus, an occasional series comprising monographs, research papers and dedicated collections of articles in Eastern Art Report and East Asia Journal, as well as publications under the Saffron imprint. Authors wishing to contribute to this series are invited to write to the Commissioning Editor using the Contact form here.

(Note: This biographical note relates to the book published in 2002. An updated biography of Helen Wang appears here). Helen Wang is Curator of East Asian Money in the Department of Coins and Medals at the British Museum. Her publications include Money on the Silk Road: the evidence from Eastern Central Asia to c.AD 800 (2004), a number of books on the archaeologist Sir Aurel Stein and his collections – including Handbook to the Stein Collections in the UK (1999), Metallurgical Analysis of Chinese Coins at the British Museum (2005), articles on East Asian money, and translations of contemporary Chinese literature.

Appendix 1: Introduction to the first major display of the Stein collections, from the Guide to an exhibition of paintings, manuscripts, and other archaeological objects, collected by Sir Aurel Stein, KCIE, in Chinese Turkestan. British Museum, 1914 — 143

Appendix 2: Meng Fanren’s Preface to the Chinese translation of Serindia — 147