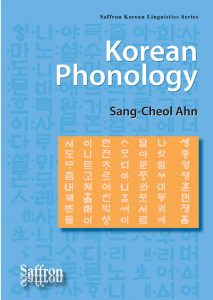 Korean Phonology, by Sang-Cheol Ahn, introduces the foundations of and fundamental issues in Korean phonology to readers participating in Korean Studies. Ahn deals here with various key topics in Korean phonology, from the basics, such as the Korean writing system, to the application of recent theoretical frameworks—such as the optimality-theoretic interpretation of the historical Korean vowel shifts.

A new edition of this book, the fourth in Saffron Korean Linguistics Series, is under preparation and updates on its publication will appear in the catalogue’s Forthcoming category in due course

Sang-Cheol Ahn is Professor of English at Kyung Hee University in Seoul. He received BA and MA in English Language at Yonsei University, Seoul, in 1977 and 1981 respectively and earned his PhD in Linguistics at the University of Illinois at Urbana-Champaign in 1985. He has been teaching at Kyung Hee University since 1986. His current research interests centre around the issues of phonological representation, especially lexical phonology and the historical and synchronic phonology of Korean, English, French and Slavic languages. He has published several books on Korean phonology, morphology and Optimality Theory. He is on the editorial boards of the Korean Journal of Linguistics, Language Research, and Stanford Encyclopedia of Korean Linguistics. He also serves on the advisory board of the Phonology Circle of Korea.