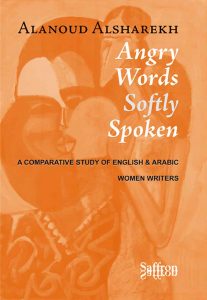 In Angry Words Softly Spoken, Alsharekh carefully examines and compares the British model of female consciousness with the development of Arab female consciousness, specifically in reference to the roles and contributions of female authors to the novel form. Feminist discourse attempts to disengage from the culture that represses it. Because of this, it is important that Alsharekh examines British and Arabic cultures separately, rather than just applying the western concept of feminism to Arabic female literature. Through this discussion and comparison, Alsharekh succeeds in arriving at a “universal understanding of the emergence of female consciousness” (p11).

Alsharekh’s comparative study is loosely based on the research presented in Elaine Showalter’s A Literature of Their Own, which suggests that there are three phases of female consciousness in the development of female novels. Showalter calls the first period the Feminine stage, a time when female writers were still directly influenced and repressed by a patriarchal society, so much so that many female writers adopted male pseudonyms in order to sell their work.

The second is called the Feminist stage, a transitional period when many female novelists’ works were focused on protesting against the male government in power and male-dominated professions, such as law and medicine.

The final stage, which continues to the present, is dubbed the Female stage. This is a time, Alsharekh says, when the female writer “doesn’t aspire to cancel out the male voice, or to subject it to the rubrics of feminist oppression, but rather to create a new order in which the two genders relate a different story of the female” (p155).

Although each set of writers shares similarities within their developmental stage, they also have many differences, in part arising from factors that are representative of each of the two cultures (British and Arabic). What is more, while all three of the British writers discussed are indigenous to the United Kingdom, and thus share a collective historical experience, the Arabic women writers discussed come from different parts of the Arab world, countries as diverse as Kuwait, Egypt and Lebanon, which were given varying degrees of liberation at different times.

In discussing each writer and her works, Alsharekh does a wonderful job of incorporating each writer’s biography, an accurate and concise summary of the work in question, and the socio-historical background of the work and it’s relevance to female consciousness. Alsharekh supports her assertions with numerous outside sources that discuss and examine the work in question from multiple angles, including thoughts not only on gender, but on class and religion as well.

She is careful, however, not to glorify each chosen work as a feminist novel in which one can find no fault. For instance, in her discussion of Bronte’s Jane Eyre, a classic, widely-praised piece of literature, Alsharekh does indicate weaknesses in the work, from a literary feminist point of view.

These weaknesses include Bronte’s portrayal of men and high society, which could be attributed to Brontë’s lack of exposure at the time, and her female characters’ compulsive need for love in order to be happy, which does little to further a feminist agenda. Alsharekh’s well-rounded approach, in which she takes into account not only the literary feminist merits of each work, but the places in which they fail to further feminism as well, give her study further credibility.

Alsharekh discusses the opposition both British and Arabic female writers have faced over the course of time, but also raises awareness of the additional pressure on female Arabic writers, such as Nawal al-Saadawi, who has often been accused of “pandering to the West” (p133) and ignoring her Arabic customs and upbringing. Saadawi, whose published works have given insight into the realities of the Arab family and the position of women in modern Muslim society, refutes these accusations on the basis that she lives in Egypt and “all her consciousness is formed in the Arab culture” (p135). In this way, Alsharekh pointedly reminds us not only of past injustices women writers have had to endure, but continued struggles within the present female literature movement as well.

Though feminism is a blanket term under which many similar and differing theories fall, Alsharekh does an excellent job of narrowing her study to focus on two models of female consciousness and six specific writers.  By studying the specific experience of a writer and her culture and comparing these to another writer’s experience and her culture, “a picture emerges piece by piece of the arrival of a new Female consciousness that is universal to the human condition” (p215). Perhaps it is through this human condition that a universal Female consciousness will truly gain power. Shannon Sweeney

Originally published in 2007 in Eastern Art Report and The Middle East in Europe.